Today over at Elizabeth Craft Designs blog a fun collection of Holiday DIY projects are being shared.  Trust me when I say you do not want to miss out on this collection of fun holiday inspired craft projects.

Today I am creating a holiday themed canvas using some of the holiday inspired dies.

Step Three:  Reassemble the igloo die cut on the gray igloo shape.  The Clear Double sided adhesive will hold the brick in place.

Step Four:  Using alcohol markers add shading to the igloo.  I used B60, B63, and B66 copic markers plus the blender.

Step Nine: For the canvas, I took a 8×8 inch wood canvas and painted it white with some Gesso.  Then I sprayed and splattered the canvas with some blue spray ink.  Finally I added a layer of heavy gesso to the bottom of the canvas to act as a layer of snow.

Step Ten:  Adhere the the Igloo die set and Santa’s Sleigh die set to the canvas using Kids Choice Glue.  Finally I wanted an additional sentiment on the canvas, so I die cut the Way with Words: Peace on Earth die set with some Silver Gray Soft Finish Cardstock.  Using a metallic gold paint pen, I added some gold detailing to the flourishes and stars and adhered the sentiment onto the canvas.

I just love how fun this canvas turned out.  It feels so wintery and holiday fun without to being a hit you over the head project!

Let me know in the comments below what your favorite part of this canvas was.  Until then, happy crafting. 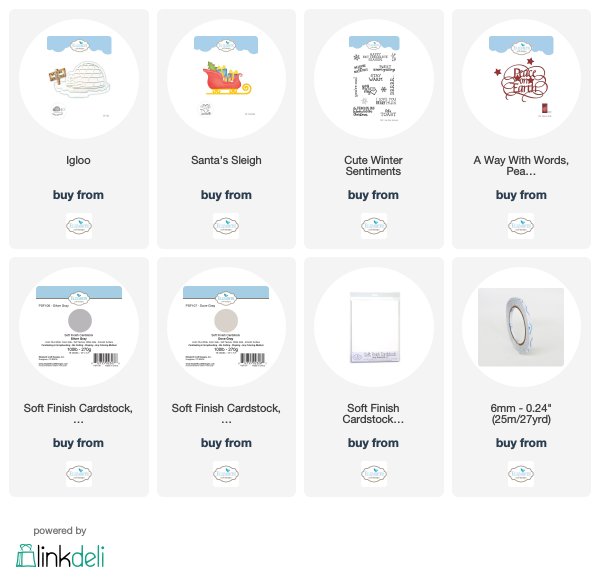