It is that time of month again when Elizabeth Craft Designs has their monthly Designer Challenge.  For those of you who don’t know what this is, it is a time when all of the ECD design team comes together with a new theme and create projects with ECD projects.

What do you get?…. a chance for a ECD gift card simply by checking out all the cool projects.

For today’s challenge Elizabeth Craft Designs are giving away a $20 Gift Card to use on our website to 3 winners.

The winners will be announced on Friday, March 2nd on the Elizabeth Craft Designs blog.

For me, I have to pick a bunch of products to make an easter card, because let’s be honest, ECD has some really cute Easter stuff.

My whole design started off with the idea that the hanging lights from the Garden Party stamp and die set looked like little hanging easter eggs.

I die cut out the image twice onto some 100lb White Soft Finished Card Stock, then stamped it (I find I am better at centering after it is die cut then centering the die cut itself), and then quickly colored in the image with some copics.  I used Y19, V06, G20, R37, B23 and YR16.

I then did the same thing with the eggs from the Color my Easter Eggs stamp and die set.  I colored in the eggs with the same copic markers that I used on the hanging eggs.  I set aside the die cut bow and used it later.

I die cut the egg from Entwined Egg die set from some Pink Peach Soft Finished Cardstock.  I added some Abandoned Coral Distress Ink around the edges of the egg to help pop the color.

I die cut out both the Large Flowers die set and the sentiment from Words 3 Happy Holidays die set.

I colored the three large flowers in with some blended Distress Ink.  The yellow flower got Dried Marigold and Mustard Seed.  The blue got just Stormy Sky.  The pink flower was colored with Spun Sugar and Worn Lipstick.

Using Susan’s Garden 4pcs all metal tool, I rounded out the edges of the flowers to give them a three dimensional look.

The bow also got rounded out using the tools and then assembled.

I pulled out a sheet of woodgrain paper from the Wood Effect paper pack and trimmed it up to 4″x5.25″ and adhered it to an A2 card Frame with some 10mm Clear Double Sided Adhesive.

I added the hanging eggs to the card and then the entwined egg.

I added the colored eggs to the card with some 3mm Clear Double Sided Adhesive and the bow with some liquid adhesive to the card.

I went to add the sentiment I colored with greens inks, and didn’t like it.  So I cut out the same sentiment with the left of pink peach paper, and wasn’t crazy about that either.

I played around with the different sentiment die cuts, and after layering a little Abandoned Coral Distress Ink, ended up layering the two, with the green on the bottom and the pink on top.

I added the flowers with some 3D adhesive squares so they would stand up a little.

Finally I added a sentiment inside the card using the Spring Sentiments stamp set.

Thanks for peaking in today and make sure you go over and look at all the other Designers gorgeous projects! 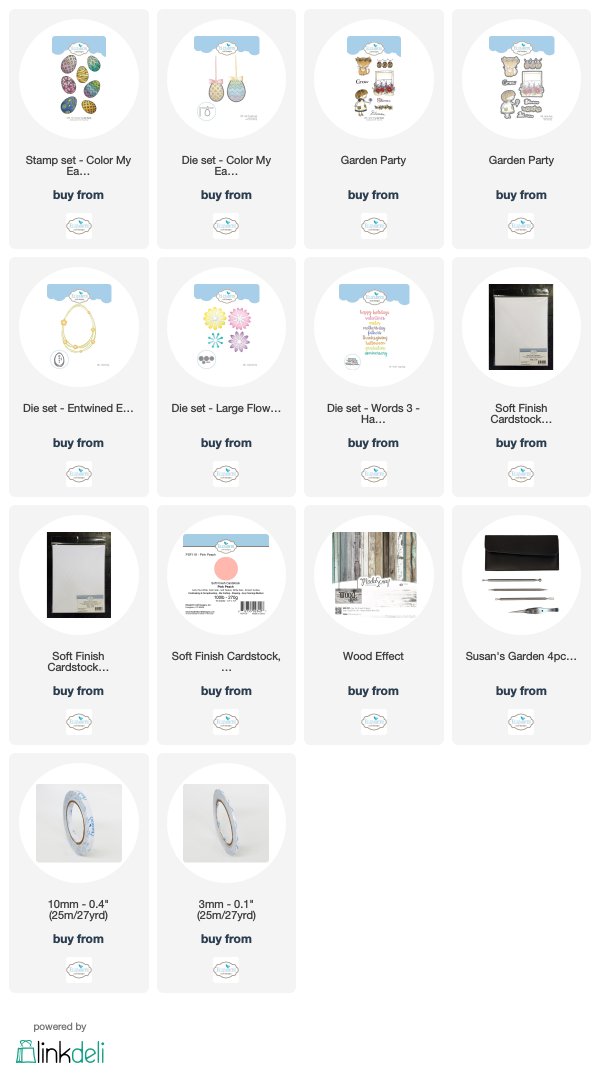