Happy Halloween’s Eve everyone.  Tomorrow is the big day of spooks and treats so I thought I would come in and not only share the next card in my 2017 Halloween card series, but a really sweet story from last year’s halloween that inspired this card.

So last year I was taking the kids trick or treating while my mom manned the door (because the husband had a business trip).  The kids and I were heading back home lugging the heavy load of our sugary spoils when were heard uncontrollable laughter around the corner.

My first thought had been, “great, drunk teens…” and I quickened my step hoping to pull the kids through what ever mess was in front of us without them noticing too much.  But as we turned the corner and saw the group who were at the epicenter of the laughter, I realized this was not a group of teenagers…in fact, I had no idea what I was looking at.

What was in front of us was two thirty-ish year old women, who by the similar appearance had to be sisters and a much older couple.  The girls (we will use this term for lack of a better one for the two thirty year old women) were the source of the uncontrollable laughter.  The older couple were laughing too, but really they were just beaming from ear to ear with joy with some chuckles mixed into the moment. 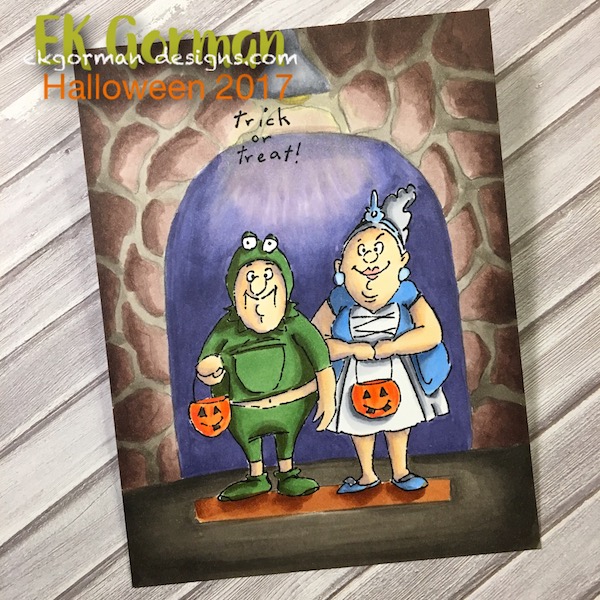 The girls quickly apologized for the behavior to me, and I let them know that wasn’t necessary.  They quickly went on to explain that their parents were in town from India, and not only had never been trick or treating, but really didn’t understand what it was.  So instead of trying to explain it, the girls dug out costumes and took their parents trick or treating for the first time.

Both adults (the husband had removed his mask at this point) smiled at my kids and me and with a heavy accent said “trick or treat”.  My kids very quickly pulled out a treat from their load and dropped a piece of candy or two into the bags the adults were carrying.

We parted ways, and my son looked at me with a huge grin on his face, and said “when I am their age, I hope I am still having that much fun!”  All I could think was ‘me too, me too.”

I think of this couple often…I remind myself that these two were ready to try something so foreign to them…I remember the pure joy both the parents and the children were having in the moment…I remind myself that none of them had the slightest concern what anyone was thinking or feeling about their behavior.  They were just living in the moment and enjoying each other’s company.

And I remind my kids of this couple often.  The kids and I (my husband thinks we all are crazy, but to his credit, he wasn’t there to see that magical moment) often rush out and live life this way, making absolute fools of ourselves and not caring for instant what anyone else thinks.  We call it our Nixon Banana moments.  We find ourselves laughing and making a bit of a scene, but knowing it doesn’t matter because they are just faces in a crowd.  And I know that these moments a fleeting and will be few as the years pass, but I try to collect each and everyone and lock them away in a vault of memory.

So when I saw this stamp set from Art Impression earlier this year, I knew I had to have it.  I just look at these two and am instantly taken back to the moment last year and find myself smiling.

I hope my story makes you smile a little….

(oh, and if it matters to you, the card was colored with my copic markers.)