I hate when this Happens 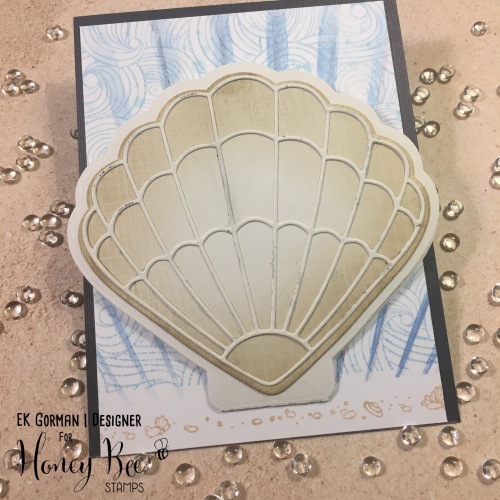 So I got more items from the recent new release from Honey Bee Stamps, and just couldn’t keep myself from playing with them this week.  However, I wanted to see if I could put a really fun twist on what otherwise would be a serious card (bear with me till the end and you’ll see.)

So, one of the least seen of the new products during the release, was this really fantastic, Seashell Card Honey Cut.  It is a really fun die, that cuts out a seashell stand alone card.  I die cut out all five pieces of the set in some off-white textured card stock.  I left the folded card, and the detailed shell design in off white, but distressed the shell cut out with some frayed burlap distress ink.  (the pearl die cuts I used later)

I wanted to create a single layer traditional sized card for the shell to sit on, so I pulled out some white card stock.  I wanted the background to look a little like the ocean, so I first pulled out the new Ocean Scene Builder Stencils Set and some Nuvo Embellishing Mousse.  I used first some Cornflower Mousse using one end of my Nuvo Blender Brush, on the wide ray of the stencil.  Then using some Old Navy Mousse and the other end of my brush, using the narrow ray stencil.  Finally, using a bit of tumbled glass distress ink, I blended through the stencil a few bubbles.

To continue building that ocean feel for the background, I pulled out the new Ocean Borders stamp set, and stamped the background stamp in sky blue Memento ink.  I also added the sea shell border to the bottom of the card with some desert sand Memento ink. 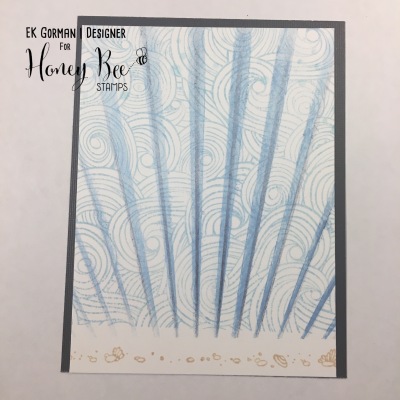 Finally, I trimmed a little off the top and sides of the card stock and matted with with a some dark navy textured card stock.

I adhered the seashell on top of the card stock with some 1/2″ Scor Tape so that it would absolute stay put and not risk lifting off the background any time you open the card.

Now here is where the fun comes in…one of my favorite Honey Bee Stamps is the king of bad luck, the Blah Bunny.  To me, it seemed perfectly reasonable that the bunny get stuck inside the shell.  I colored him in with a bit of copics and fussy cut out both him and his ‘beach’ blanket.  To cap that, I pulled the perfect sentiment from Blah, Blah, Blah sentiment set.  I also added another shell die cut panel, this time distressed with some victorian velvet distress ink and one of the pearls covered in ranger liquid pearls.

Maybe the Blah Bunny turns a rather classy card crass, but for me, it is exactly the unexpected surprise I like in cards.  Let me know what you think!